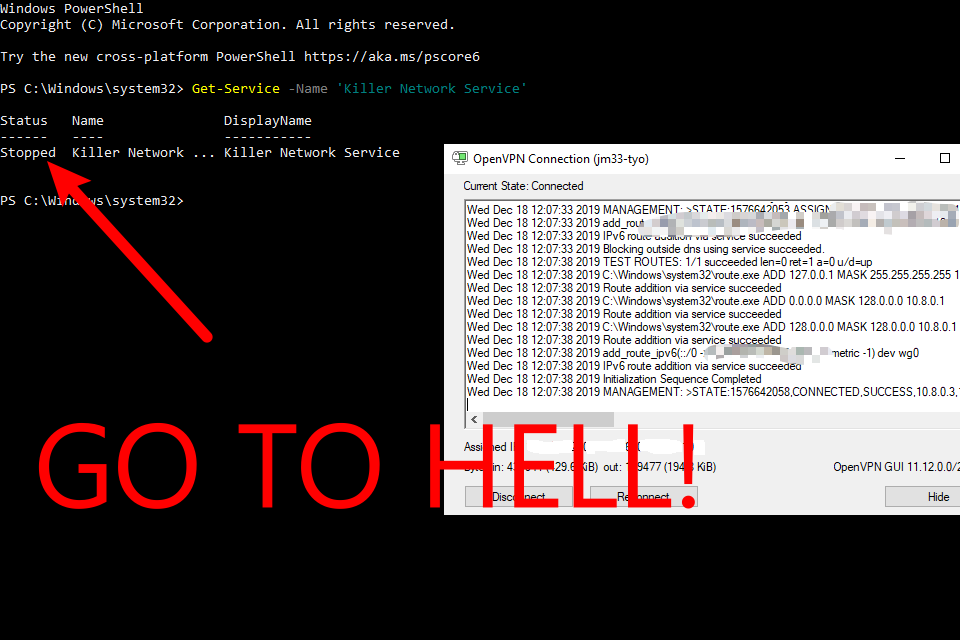 windows update thinks my computer is lacking killer software, it keeps installing the shit back... why the fuck do i need the dumb ass killer network service???

i want to ask you, my dear readers, do you want the fucking killer network service to "examine" every packet sent from your NIC???

recently i installed Windows 10 1909 on my XPS 9360, which uses Killer 1535 wireless NIC. i also installed Killer's software suite, including the killer control center which, never worked before on my XPS.

surprisingly, killer control center works this time. what i didnt expect, however, is OpenVPN resetting its connections every time i use it on a wireless network

it had been a pain in the ass for many days

i thought it was OpenVPN's fault at first, but i couldnt find anything in server log, the only error i see is from client log:

is it because of NAT?? i tried several different wireless APs, OpenVPN just doesnt care, resets its connection after 10 or 20 seconds after its "successful" connection, each and every fucking time, forever and ever

i was extremely confused, who the fuck sends this RST???

i opened wireshark, and typed tcp.flags.reset == 1

guess what? the RST is from my local machine, to the remote server

what the fuck! who would send this fucking RST packet???

suddenly i realized i have the notorious killer software installed, and something called killer network service really hurts my eyes

i decided to stop that shit, and retry my OpenVPN connection on a wireless network

then i downloaded killer's cleaner tool, uninstalls every application and service related to killer

yeah believe what you see, it DOES DROP 90% of your inbound traffic

if you look into wireshark, its basically a sea of TCP restransmission, red as fuck. and in the mean time your download speed is about 1Mbps

why? this shit took me days to figure out:

It disables something called Packet Coalescing. Basically, when your PC receives a network packet (for example, a chunk of data from a file that you're downloading or transferring), it has to process the data (i.e save it onto your hard drive). Without packet coalescing, every time you get a network packet, your system will use something called an "Interrupt", basically it yells at the CPU to come and process the packet asap ("interrupting" it from what it was otherwise doing). This gets the job done, but it can be very inefficient, and can greatly increase CPU usage (particularly with very fast connections, which send packets at much higher rates), and hence we have Packet Coalescing (or as the name implies: "merging" packets together). Basically, when a packet arrives, instead of sending out the interrupt straight away, we can wait for a little bit. If more packets arrive, then we we merge them all together. When the timer runs out, or our mega-packet reaches a certain size, or we receive the last packet for the message/data being sent; then we fire the interrupt and process everything. If we managed to combine multiple packets, then we can process them all in one go, with only a single interrupt - a big saving. This feature can add some of latency (occasionally an issue for i.e online games), but it should actually be improving the transfer speeds (let alone reducing them by this much). So long story short, there's probably a bug in there somewhere (i.e the Windows version of a driver) which is messing things up.

if you are experiencing the same issues, please consider replacing your fucking killer card with an intel one, personally i bought an AX200

if you really dont want to replace this shit, uninstall every junkware killer might have installed on your computer